PHYSICS PROJECT REPORT ON PRISM WITH LIGHT RAY/LAWS OF REFLECTION

In optics, a prism is a transparent optical element with flat, polished surfaces that refract light. At least two of the flat surfaces must have an angle between them. The exact angles between the surfaces depend on the application. The traditional geometrical shape is that of a triangular prism with a triangular base and rectangular sides, and in colloquial use “prism” usually refers to this type. Some types of optical prism are not in fact in the shape of geometric prisms. Prisms can be made from any material that is transparent to the wavelengths for which they are designed. Typical materials include glass, plastic, and fluorite.

A dispersive prism can be used to break light up into its constituent spectral colors (the colors of the rainbow). Furthermore, prisms can be used to reflect light, or to split light into components with different polarizations.

Light changes speed as it moves from one medium to another (for example, from air into the glass of the prism). This speed change causes the light to be refracted and to enter the new medium at a different angle (Huygens principle). The degree of bending of the light’s path depends on the angle that the incident beam of light makes with the surface, and on the ratio between the refractive indices of the two media (Snell’s law). The refractive index of many materials (such as glass) varies with the wavelength or color of the light used, a phenomenon known as dispersion. This causes light of different colors to be refracted differently and to leave the prism at different angles, creating an effect similar to a rainbow. This can be used to separate a beam of white light into its constituent spectrum of colors. A similar separation happens with iridescent materials, such as a soap bubble. Prisms will generally disperse light over a much larger frequency bandwidth than diffraction gratings, making them useful for broad-spectrum spectroscopy. Furthermore, prisms do not suffer from complications arising from overlapping spectral orders, which all gratings have. 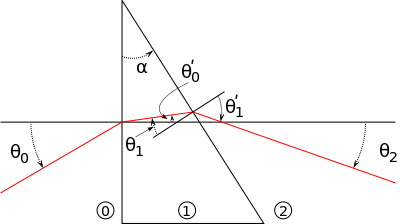 A ray trace through a prism with apex angle α. Regions 0, 1, and 2 have indices of refraction {\displaystyle n_{0}}

indicate the ray’s angle after refraction.

Ray angle deviation and dispersion through a prism can be determined by tracing a sample ray through the element and using Snell’s law at each interface. For the prism shown at right, the indicated angles are given by

All angles are positive in the direction shown in the image. For a prism in air {\displaystyle n_{0}=n_{2}\simeq 1}

If the angle of incidence {\displaystyle \theta _{0}}

if the angles are expressed in radians. This allows the nonlinear equation in the deviation angle {\displaystyle \delta }

to be approximated by 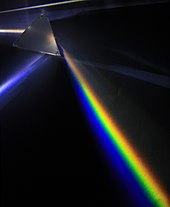 Before Isaac Newton, it was believed that white light was colorless[citation needed], and that the prism itself produced the color. Newton’s experiments demonstrated that all the colors already existed in the light in a heterogeneous fashion, and that “corpuscles” (particles) of light were fanned out because particles with different colors traveled with different speeds through the prism. It was only later that Young and Fresnel combined Newton’s particle theory with Huygens’ wave theory to show that color is the visible manifestation of light’s wavelength.

Newton arrived at his conclusion by passing the red color from one prism through a second prism and found the color unchanged. From this, he concluded that the colors must already be present in the incoming light — thus, the prism did not create colors, but merely separated colors that are already there. He also used a lens and a second prism to recompose the spectrum back into white light. This experiment has become a classic example of the methodology introduced during the scientific revolution. The results of this experiment dramatically transformed the field of metaphysics, leading to John Locke‘s primary vs secondary quality distinction.[citation needed]

Dispersive prisms are used to break up light into its constituent spectral colors because the refractive index depends on frequency; the white light entering the prism is a mixture of different frequencies, each of which gets bent slightly differently. Blue light is slowed down more than red light and will therefore be bent more than red light.

Reflective prisms are used to reflect light, in order to flip, invert, rotate, deviate or displace the light beam. They are typically used to erect the image in binoculars or single-lens reflex cameras – without the prisms the image would be upside down for the user. Many reflective prisms use total internal reflection to achieve high reflectivity.

The most common reflective prisms are:

Some reflective prisms are used for splitting a beam into two or more beams:

There are also polarizing prisms which can split a beam of light into components of varying polarization. These are typically made of a birefringent crystalline material.

Wedge prisms are used to deflect a beam of light by a fixed angle. A pair of such prisms can be used for beam steering; by rotating the prisms the beam can be deflected into any desired angle within a conical “field of regard”. The most commonly found implementation is a Risley prism pair. Two wedge prisms can also be used as an anamorphic pair to change the shape of a beam. This is used to make a round beam from the elliptical output of a laser diode.

Rhomboid prisms are used to laterally displace a beam of light without inverting the image.

Deck prisms were used on sailing ships to bring daylight below deck, since candles and kerosene lamps are a fire hazard on wooden ships.

By shifting corrective lenses off axis, images seen through them can be displaced in the same way that a prism displaces images. Eye care professionals use prisms, as well as lenses off axis, to treat various orthoptics problems:

In contrast, spectacles with prisms of equal power for both eyes, called yoked prisms (also: conjugate prisms, ambient lenses or performance glasses) shift the visual field of both eyes to the same extent