A close-up of a caliper’s measurement scales. Assuming the caliper has no “zero error” (that is, it registers 0.00 mm when fully closed) the image shows a reading of 3.58 mm ± 0.02 mm. This is found by adding 3.00 mm (left red mark) read off from the fixed main (upper) scale to 0.58 mm (right red mark) obtained from the sliding vernier (lower) scale. The main scale reading is determined by the rightmost tick on the main scale that is to the left of the zero tick on the vernier scale. The vernier reading is found by locating the closest aligned lines between the two scales. The 0.02 mm inscription indicates the caliper’s precision and is just the width that corresponds to the smallest interval on the vernier scale.

A vernier scale is a visual aid that allows the user to measure more precisely than could be done unaided when reading a uniformly divided straight or circular measurement scale. It is a subsidiary scale that indicates where the measurement lies in between two of the graduations on the main scale. Verniers are common on sextants used in navigation, scientific instruments used to conduct experiments, machinists‘ (or jewelers‘) measuring tools (all sorts, but especially calipers and micrometers) used to work materials to fine tolerances, on theodolites used in surveying, and in absolute encoders to measure linear or rotational displacements. 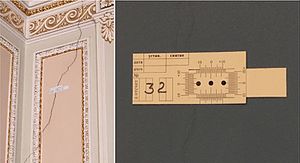 Calipers without a vernier scale originated in ancient China as early as the Qin dynasty (AD 9) The secondary scale, which contributed extra precision, was invented in 1631 by French mathematician Pierre Vernier (1580–1637). Its use was described in detail in English in Navigatio Britannica (1750) by mathematician and historian John Barrow. While calipers are the most typical use of Vernier scales today, they were originally developed for angle-measuring instruments such as astronomical quadrants.

In some languages, the Vernier scale is called a nonius, a precursor to the Vernier scale developed by Portuguesemathematician, cosmographer Pedro Nunes (1502–1578), latinised as Petrus Nonius. It was known by this name in English until the end of the 18th century

In the following, N is the number of divisions the maker wishes to show at a finer level of measure.

Direct and retrograde verniers are read in the same manner.

Animation of a caliper measurement using a vernier scale. Click to enlarge

The main use of the vernier caliper is to measure the internal and the external diameters of an object. To measure using a vernier scale, the user first reads the finely marked “fixed” scale (i.e. the main scale; see the diagram). This measure is typically between two of the main scale’s smallest graduations. The user then reads the vernier scale (see diagram), which measures between the smallest graduations on the fixed scale—providing much greater precision.

S/n and (S-V) are both equal to the least count of vernier scale, and are also called the vernier constant.

On decimal measuring instruments, as in the diagram below, the indicating scale has 10 graduations that cover the same length as 9 on the data scale. Note that the vernier’s 10th graduation is omitted.

On an angular measurement instrument, the data scale might be in half-degrees, with an indicator scale that provides 30 1-minute graduations (that span 29 of the half-degree graduations).

Mechanism of a vernier scale

The vernier scale is constructed so that it is spaced at a constant fraction of the fixed main scale. So for a decimal measuring device each mark on the vernier is spaced nine tenths of those on the main scale. If you put the two scales together with zero points aligned, the first mark on the vernier scale is one tenth short of the first main scale mark, the second two tenths short, and so on up to the ninth mark—which is misaligned by nine tenths. Only when a full ten marks are counted is there alignment, because the tenth mark is ten tenths—a whole main scale unit short, and therefore aligns with the ninth mark on the main scale.

Now if you move the vernier by a small amount, say, one tenth of its fixed main scale, the only pair of marks that come into alignment are the first pair, since these were the only ones originally misaligned by one tenth. If we move it two tenths, the second pair aligns, since these are the only ones originally misaligned by that amount. If we move it five tenths, the fifth pair aligns—and so on. For any movement, only one pair of marks aligns and that pair shows the value between the marks on the fixed scale.

Vernier scales work so well because most people are especially good at detecting which of the lines is aligned and misaligned, and that ability gets better with practice, in fact far exceeding the optical capability of the eye. This ability to detect alignment is called ‘Vernier acuity’ Historically, none of the alternative technologies exploited this or any other hyperacuity, giving the Vernier scale an advantage over its competitors.

Zero error is defined as the condition where a measuring instrument registers a reading when there should not be any reading. In case of vernier calipers it occurs when a zero on main scale does not coincide with a zero on vernier scale. The zero error may be of two types i.e. when the scale is towards numbers greater than zero it is positive else negative. The method to use a vernier scale or caliper with zero error is to use the formula: actual reading = main scale + vernier scale − (zero error). Zero error may arise due to knocks that cause the calibration to be thrown off at the 0.00 mm when the jaws are perfectly closed or just touching each other.