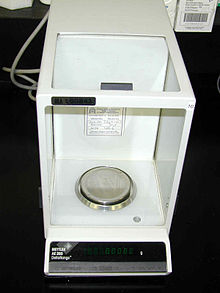 An analytical balance (often called a “lab balance”) is a class of balance designed to measure small mass in the sub-milligram range. The measuring pan of an analytical balance (0.1 mg or better) is inside a transparent enclosure with doors so that dust does not collect and so any air currents in the room do not affect the balance’s operation. This enclosure is often called a draft shield. The use of a mechanically vented balance safety enclosure, which has uniquely designed acrylic airfoils, allows a smooth turbulence-free airflow that prevents balance fluctuation and the measure of mass down to 1 μg without fluctuations or loss of product.[citation needed] Also, the sample must be at room temperature to prevent natural convection from forming air currents inside the enclosure from causing an error in reading. Single pan mechanical substitution balance maintains consistent response throughout the useful capacity is achieved by maintaining a constant load on the balance beam, thus the fulcrum, by subtracting mass on the same side of the beam to which the sample is added.[citation needed]

Electronic analytical scales measure the force needed to counter the mass being measured rather than using actual masses. As such they must have calibration adjustments made to compensate for gravitational differences.They use an electromagnet to generate a force to counter the sample being measured and outputs the result by measuring the force needed to achieve balance. Such measurement device is called electromagnetic force restoration sensor.

Triple beam balance is an instrument used to measure mass very precisely. The device has reading error of +/- 0.05 gram. The name refers to the three beams including the middle beam which is the largest size, the front beam which is the medium size, and the far beam which is the smallest size . The difference in size of the beams indicate the difference in weights and reading scale that each beam carry. The reading scale can be enumerated that the middle beam reads in 100 gram increments, the front beam can read from 0 to 10 grams, and the far beam can read in 10 gram increments. The triple beam balance can be used to measure mass directly into from the objects, find mass by difference for liquid, and measure out a substance. The parts of triple beam balance are identified as the following.