The parallel motion is a mechanical linkage invented by the Scottish engineer James Watt in 1784 for the double-acting Watt steam engine. It allows a rod moving straight up and down to transmit motion to a beam moving in an arc, without putting sideways strain on the rod. 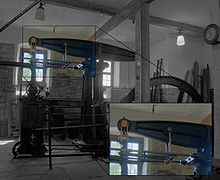 In previous engines built by Newcomen and Watt, the piston pulled one end of the walking beam downwards during the power stroke using a chain, and the weight of the pump pulled the other end of the beam downwards during the recovery stroke using a second chain, the alternating forces producing the rocking motion of the beam. In Watt’s new double-acting engine, the piston produced power on both the upward and downward strokes, so a chain could not be used to transmit the force to the beam. Watt designed the parallel motion to transmit force in both directions whilst keeping the piston rod vertical. He called it “parallel motion” because both the piston and the pump rod were required to move vertically, parallel to one another.

Hand-drawn diagram in James Watt‘s letter to his son.[1]

In a letter to his son in 1808 describing how he arrived at the design, James Watt wrote “I am more proud of the parallel motion than of any other invention I have ever made.”[1] The sketch he included actually shows what is now known as Watt’s linkage which was a linkage described in Watt’s 1784 patent but it was immediately superseded by the parallel motion.[2]

The parallel motion differed from Watt’s linkage by having an additional pantograph linkage incorporated in the design. This did not affect the fundamental principle but it allowed the engine room to be smaller because the linkage was more compact.[2]

See the diagram on the right. A is the journal (bearing) of the walking beam KAC, which rocks up and down about A. H is the piston, which is required to move vertically but not horizontally. The heart of the design is the four-bar linkage consisting of AB, BE and EG and the base link is AG, both joints on the framework of the engine. As the beam rocks, point F (which is drawn to aid this explanation, but which is not visible on the machine itself) describes an elongated figure-of-eight (more precisely, a lemniscate of Bernoulli) in mid-air. Since the motion of the walking beam is constrained to a small angle, F describes only a short section of the figure-of-eight, which is quite close to a vertical straight line. The figure-of-eight is symmetrical as long as arms AB and EG are equal in length, and straightest when the ratio of BF to FE matches that of AB to EG. If the stroke length (that is, the maximum travel of F) is S, then the straight section is longest when BE is around 2/3 S and AB is 1.5 S.[3]

It would have been possible to connect F directly to the piston rod (the “Watt’s linkage” design), but this would have made the machine an awkward shape, with G a long way from the end of the walking beam. To avoid this, Watt added the parallelogram linkage BCDE to form a pantograph. This guarantees that F always lies on a straight line between A and D, and therefore that the motion of D is a magnified version of the motion of F. D is therefore the point to which the piston rod DH is attached. The addition of the pantograph also made the mechanism shorter and so the building containing the engine could be smaller.

As already noted, the path of F is not a perfect straight line, but merely an approximation. Watt’s design produced a deviation of about one part in 4000 from a straight line. Later, in the 19th century, perfect straight-line linkages were invented, beginning with the Peaucellier–Lipkin linkage of 1864.