A kaleidoscope is an optical instrument with two or more reflecting surfaces tilted to each other in an angle, so that one or more (parts of) objects on one end of the mirrors are seen as a regular symmetrical pattern when viewed from the other end, due to repeated reflection. The reflectors (or mirrors) are usually enclosed in a tube, often containing on one end a cell with loose, colored pieces of glass or other transparent (and/or opaque) materials to be reflected into the viewed pattern. Rotation of the cell causes motion of the materials, resulting in an ever-changing viewed pattern.

Coined in 1817 by Scottish inventor David Brewster,[1] “kaleidoscope” is derived from the Ancient Greek καλός (kalos), “beautiful, beauty”,[2] εἶδος (eidos), “that which is seen: form, shape”[3] and σκοπέω (skopeō), “to look to, to examine”,[4] hence “observation of beautiful forms.”[5]

The basic configuration of reflecting surfaces in the kaleidoscope, as illustrated in the 1817 patent. Fig. 2 and Fig. 3 show alternative shapes of the reflectors.

A kaleidoscope operates on the principle of multiple reflection, where two or more reflectors are placed at an angle to one another. When the eye is placed at one end of the reflectors, the original view from the aperture on the other side is multiplied into a symmetrical mosaic pattern. A two-mirror kaleidoscope yields a circular pattern isolated against a solid black background, while the three-mirror equilateral triangle type yields an infinite pattern that fills the entire visual field.

A proper kaleidoscope image can be achieved with a convex lens of such a focal length that the images of all surrounding objects were distinctly formed at the end of the reflectors and thus introduced into the reflected pattern.[7]

An “object-box” (or cell) on the ends of the reflectors can hold selected objects to be viewed in the reflected pattern. Colorful transparent shapes (for instance pieces of glass or colored fluids moving in transparent containers) to create beautiful patterns. Objects smaller than the aperture create a spotted appearance of the pattern.[6] Larger opaque objects and darker colors don’t transmit much light and are usually avoided. If objects, fragments and/or liquids are loosely placed inside the cell and tumble when the cell is rotated, motion and change of colors and shapes can be introduced into the viewed pattern.

Patterns when seen through a kaleidoscope tube

Multiple reflection by two or more reflecting surfaces has been known since antiquity and was described as such by Giambattista della Portain his Magia Naturalis (1558-1589). In 1646 Athanasius Kircher described an experiment with a construction of two mirrors, which could be opened and closed like a book and positioned in various angles, showing regular polygon figures consisting of reflected aliquot sectors of 360°. Mr. Bradley’s New Improvements in Planting and Gardening (1717) described a similar construction to be placed on geometrical drawings to show an image with multiplied reflection. However, an optimal configuration that produces the full effects of the kaleidoscope was not recorded before 1815.[6]

In 1814 Sir David Brewster conducted experiments on light polarization by successive reflections between plates of glass and first noted “the circular arrangement of the images of a candle round a center, and the multiplication of the sectors formed by the extremities of the plates of glass”. He forgot about it, but noticed a more impressive version of the effect during further experiments in February 1815. A while later he was impressed by the multiplied reflection of a bit of cement that was pressed through at the end of a triangular glass trough, which appeared more regular and almost perfectly symmetrical in comparison to the reflected objects that had been situated further away from the reflecting plates in earlier experiments. This triggered more experiments to find the conditions for the most beautiful and symmetrically perfect conditions. An early version had pieces of colored glass and other irregular objects fixed permanently and was admired by some Members of the Royal Society of Edinburgh, including Sir George Mackenzie who predicted its popularity. A version followed in which some of the objects and pieces of glass could move when the tube was rotated. The last step, regarded as most important by Brewster, was to place the reflecting panes in a draw tube with a concave lens to distinctly introduce surrounding objects into the reflected pattern.[6]

Brewster thought his instrument to be of great value in “all the ornamental arts” as a device that creates an “infinity of patterns”. Artists could accurately delineate the produced figures of the kaleidoscope by means of the solar microscope (a type of camera obscura device), magic lantern or camera lucida. Brewster believed it would at the same time become a popular instrument “for the purposes of rational amusement”. He decided to apply for a patent.[6] British patent no. 4136 “for a new Optical Instrument called “The Kaleidoscope” for exhibiting and creating beautiful Forms and Patterns of great use in all the ornamental Arts” was granted in July 1817.[7][8] Unfortunately the manufacturer originally engaged to produce the product had shown one of the patent instruments to some of the London opticians to see if he could get orders from them. Soon the instrument was copied and marketed before the manufacturer had prepared any number of kaleidoscopes for sale. An estimated two hundred thousand kaleidoscopes sold in London and Paris in just three months. Brewster figured at most a thousand of these were authorized copies that were constructed correctly, while the majority of the others did not give a correct impression of his invention. Because now relatively few people had experienced a proper kaleidoscope or knew how to apply it to ornamental arts, he decided to publicize a treatise on the principles and the correct construction of the kaleidoscope.[6]

It was thought that the patent was reduced in a Court of Law since its principles were supposedly already known. Brewster stated that the kaleidoscope was different because the particular positions of the object and of the eye, played a very important role in producing the beautiful symmetrical forms. Brewster’s opinion was shared by several scientists, including James Watt.[9]

Philip Carpenter originally tried to produce his own imitation of the kaleidoscope, but was not satisfied with the results. He decided to offer his services to Brewster as manufacturer.[10] Brewster agreed and Carpenter’s models were stamped “sole maker”. Realizing that the company could not meet the level of demand, Brewster gained permission from Carpenter in 1818 for the device to be made by other manufacturers. In his 1819 Treatise on the Kaleidoscope Brewster listed more than a dozen manufacturers/sellers of patent kaleidoscopes.[6] Carpenter’s company would keep on selling kaleidoscopes for 60 years.[11] H.M. Quackenbush Co. based in Upstate New York in the United States was another authorized manufacturer.[12]

In 1987, kaleidoscope artist Thea Marshall, working with the Willamette Science and Technology Center, a science museum located in the Eugene, Oregon, designed and constructed a 1,000 square foot traveling mathematics and science exhibition, “Kaleidoscopes: Reflections of Science and Art.” With funding from the National Science Foundation[13], and circulated under the auspices of the Smithsonian Institution Traveling Exhibition Service (SITES[14]), the exhibition appeared in 15 science museums over a three year period, reaching more than one million visitors in the United States and Canada. Interactive exhibit modules enabled visitors to better understand and appreciate how kaleidoscopes function. 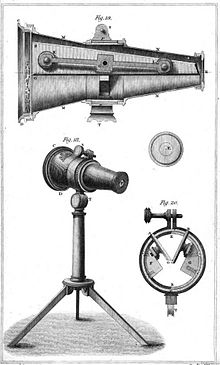 Polyangular Kaleidoscope of R.B. Bate (with adjustable reflector angles), as illustrated in Treatise on the Kaleidoscope (1819)

David Brewster defined several variables in his patent and publications:

In his patent Brewster perceived two forms for the kaleidoscope:

In his Treatise on the Kaleidoscope (1819) he described the basic form with an object cell: 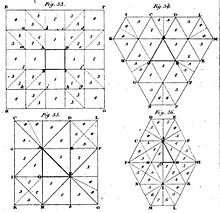 Alternative positions of the reflectors in the kaleidoscope, as illustrated in the 1817 patent.

Brewster also imagined another application for the kaleidoscope:

Manufacturers and artists have created kaleidoscopes with a wide variety of materials and in many shapes. A few of these added elements that were not previously described by inventor David Brewster:

Cozy Baker (d. October 19, 2010)—founder of the Brewster Kaleidoscope Society—collected kaleidoscopes and wrote books about many of the artists making them in the 1970s through 2001. Her book Kaleidoscope Artistry[16] is a limited compendium of kaleidoscope makers, containing pictures of the interior and exterior views of contemporary artworks. Baker is credited with energizing a renaissance in kaleidoscope-making in the US; She spent her life putting kaleidoscope artists and galleries together so they would know each other and encourage each other.[17]

A woman looks into a large kaleidoscope

Most kaleidoscopes are mass-produced from inexpensive materials, and intended as children’s toys. At the other extreme are handmade pieces that display fine craftsmanship. Craft galleries often carry a few kaleidoscopes, while other enterprises specialize in them, carrying dozens of different types from different artists and craftspeople. Most handmade kaleidoscopes are now made in Russia and Italy, following a long tradition of glass craftsmanship in those countries.[citation needed]