Article 9 of Indian Constitution says that a person who voluntarily acquires citizenship of any other country is no longer an Indian citizen. Also, according to The Passports Act, a person has to surrender his/her Indian passport and voter card and other Indian ID cards must not be used after another country’s citizenship is obtained. It is a punishable offence if the person fails to surrender the passport.

Effective from 15 August 1947, India was established as the independent Dominion of India. Along with subjects of the other British Dominions, Indians resident, born and naturalised in Indian provinces legally remained British subjects by virtue of Section 18(3) of the Indian Independence Act, unless they had already acquired citizenship of the United Kingdom or any other country. From 15 August, British protection over the princely states lapsed, and Indians who were subjects of a principality automatically lost their status as British protected persons.[note 2] The rulers and Indian subjects of princely states which had acceded to the Dominion of India or to the Dominion of Pakistan on or prior to 15 August (termed “Acceding States”) became British subjects.[2][note 3] Indians resident in a princely state which had not acceded to either Dominion by 15 August became temporarily stateless, lacking any recognized nationality or British subject status, though remaining subjects of their state.

On 20 December 1961, India acquired the territories of Goa, Daman and Diu and Dadra and Nagar Haveli after the military action which were under the territories of Portugal. The French territory of Puducherry, Karaikal, Mahé, Yanam and the Free town of Chandranagore, were acquired under treaty of cession with France. Sikkim was also merged with India and became a constituent state with effect from 16 May 1975. Some of the enclaves in the eastern part of India were also acquired under border agreements with Pakistan and Bangladesh.[3]

In order to expressly provide the citizenship for people in territories as mentioned above, the central government issued the Goa, Daman and Diu (Citizenship) Order, 1962, Dadra and Nagar Haveli (Citizenship) Order, 1962 and Citizenship (Pondicherry) Order 1962, in exercise of its powers under section 7 of the Citizenship act and for Sikkim, the President extended the Citizenship act, and the relevant rules under Article 371-F(n) of Indian Constitution. In case of acquired enclaves, that did not necessitate legislative action, as that was only a border demarcation agreement.[3]

Cover of an Indian passport

Citizenship at the commencement of the constitution of India[edit]

Persons domiciled in the territory of India as on 26 November 1949 automatically became Indian citizens by virtue of operation of the relevant provisions of the Indian Constitution coming into force, and most of these constitutional provisions came into force on 26 January 1950. The Constitution of India also made provision regarding citizenship for migrants from the territories of Pakistan which had been part of India before partition.

Persons born outside India on or after 26 January 1950 but before 10 December 1992 are citizens of India by descent if their father was a citizen of India at the time of their birth.

Persons born outside India on or after 10 December 1992 are considered citizens of India if either of their parents is a citizen of India at the time of their birth.

From 3 December 2004 onwards, persons born outside of India shall not be considered citizens of India unless their birth is registered at an Indian diplomatic mission within one year of the date of birth. In certain circumstances it is possible to register after one year with the permission of the Central Government. The application for registration of the birth of a child must be made to an Indian diplomatic mission and must be accompanied by an undertaking in writing from the parents of the child that he or she does not hold the passport of another country.

The Central Government may, on an application, register as a citizen of India under section 5 of the Citizenship Act 1955 any person (not being an illegal migrant) if s/he belongs to any of the following categories:

Citizenship of India by naturalisation can be acquired by a foreigner (not illegal migrant) who is ordinarily resident in India for 12 years (throughout the period of 12 months immediately preceding the date of application and for 11 years in the aggregate in the 14 years preceding the 12 months) and other qualifications as specified in Third Schedule to the Citizen Act.

Renunciation and termination of Indian citizenship

The acquisition of another country’s passport is also deemed under the Citizenship Rules, 1956 to be voluntary acquisition of another country’s nationality. Rule 3 of Schedule III of the Citizenship Rules, 1956 states that “the fact that a citizen of India has obtained on any date a passport from the Government of any other country shall be conclusive proof of his/her having voluntarily acquired the citizenship of that country before that date”. Again, this rule applies even if the foreign passport was obtained for the child by his or her parents, and even if possession of such a passport is required by the laws of a foreign country which considers the child to be one of its citizens (e.g., a US-born child of Indian parents who is automatically deemed to be a US citizen according to US law, and who is therefore required by US law to have a US passport in order to enter and leave the US). It does not matter that a person continues to hold an Indian passport. This rule seemingly even applies if the foreign nationality was automatically had from birth, and thus not voluntarily acquired after birth. Persons who acquire another citizenship lose Indian citizenship from the date on which they acquire that citizenship or another country’s passport. The prevailing practice at a number of British diplomatic posts, for example, is to impound and return to the Indian authorities the Indian passports of those applicants who apply for and are granted British passports.[5]

Special rules exist for Indian citizens with a connection to Goa, Daman and Diu. Rule 3A of Schedule III of the Citizenship Rules, 1956 states that “Where a person, who has become an Indian Citizen by virtue of the Goa, Daman and Diu (Citizenship) Order, 1962, or the Dadra and Nagar Haveli (Citizenship) Order 1962, issued under section 7 of the Citizenship Act, 1955 (57 of 1955) holds a passport issued by the Government of any other country, the fact that he has not surrendered the said passport on or before the 19 January 1963 shall be conclusive proof of his/her having voluntarily acquired the citizenship of that country before that date.

Front Cover of an OCI Registration Certificate. Note: It may look like but it is not a passport nor does it confer actual Dual citizenship.

In response to persistent demands for dual citizenship, particularly from the diaspora in North America and other developed countries, the Overseas Citizenship of India (OCI) scheme was introduced by amending The Citizenship Act, 1955 in August 2005. The scheme was launched during the Pravasi Bharatiya Divas convention in Hyderabad in 2006.[6] Indian authorities have interpreted the law to mean a person cannot have a second country’s passport simultaneously with an Indian one — even in the case of a child who is claimed by another country as a citizen of that country, and who may be required by the laws of the other country to use one of its passports for foreign travel (such as a child born in the United States or in Australia to Indian parents), and the Indian courts have given the executive branch wide discretion over this matter. Therefore, Overseas Citizenship of India is not an actual citizenship of India[7] and thus, does not amount to dual citizenship or dual nationality or anyone no longer to use Indian IDs after OCI. Moreover, the OCI card is not a substitute for an Indian visa and therefore, the passport which displays the lifetime visa must be carried by OCI holders while travelling to India.[8] OCI Cards are now being printed without the lifelong “U” Visa Sticker (which is normally pasted on the applicant’s passport). The proof of lifelong visa will be just the OCI Card which will have “Life Time Visa” printed on it. The OCI Card will be valid with any Valid Passport. However, countries may consider the OCI as dual citizenship: for example, the UK government considers that, for purposes of the British Nationality Act 1981, “OCI is considered to be citizenship of another State”.[9] 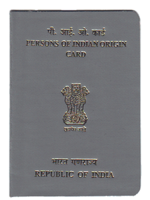 Front cover of a PIO card

This was a form of identification issued to an individual who held a passport in a country other than Afghanistan, Bangladesh, Bhutan, China, Nepal, Pakistan and Sri Lanka and could prove their Indian origin up to three generations before.

In early 2011, the then Prime Minister of India, Manmohan Singh, announced that the Person of Indian Origin card will be merged with the Overseas Citizen of India card.[10] This new card was proposed to be called the Overseas Indian Card.[11]

As of 9 January 2015, the PIO card scheme has been discontinued and applicants are to apply for OCI only. All currently held PIO cards are treated as OCI cards. PIO card holders will get a special stamp in their existing PIO card, saying “lifelong validity” thus making them equal to existing OCI cards.[12]

There are still some ways in which a person may have dual citizenship of India and another country, including:

A public interest litigation (PIL) seeking dual citizenship[13] for overseas Indians was filed in the Supreme Court on 6 January 2015[14] on the eve of the inauguration of the Pravasi Bharatiya Divas (PBD) in Gujarat‟s capital Gandhinagar by Prime Minister Narendra Modi.

On 20 April 2015, the Supreme Court of India dismissed the Public Interest Litigation (PIL). In dismissing the said PIL, the Supreme Court reasoned that Mr. Venkat Narayan cannot plead on somebody else’s behalf as he is not the aggrieved party and those who need to assert their right should come forward.[15]

Visa requirements for Indian citizens are administrative entry restrictions by the authorities of other states placed on citizens of India. As of 13 February 2018, Indian citizens had visa-free or visa on arrival access to 56 countries and territories, ranking the Indian passport 81st in terms of travel freedom (tied with Ivory Coast, Senegal and Togo passports), according to the Henley visa restrictions index.[16]