A thermoelectric generator (TEG), also called a Seebeck generator, is a solid state device that converts heat flux (temperature differences) directly into electrical energy through a phenomenon called the Seebeck effect (a form of thermoelectric effect). Thermoelectric generators function like heat engines, but are less bulky and have no moving parts. However, TEGs are typically more expensive and less efficient

In 1821, Thomas Johann Seebeck discovered that a thermal gradient formed between two dissimilar conductors can produce electricity.At the heart of the thermoelectric effect is the fact that a temperature gradient in a conducting material results in heat flow; this results in the diffusion of charge carriers. The flow of charge carriers between the hot and cold regions in turn creates a voltage difference. In 1834, Jean Charles Athanase Peltier discovered the reverse effect, that running an electric current through the junction of two dissimilar conductors could, depending on the direction of the current, cause it to act as a heater or cooler.

Thermoelectric materials generate power directly from heat by converting temperature differences into electric voltage. These materials must have both high electrical conductivity (σ) and low thermal conductivity (κ) to be good thermoelectric materials. Having low thermal conductivity ensures that when one side is made hot, the other side stays cold, which helps to generate a large voltage while in a temperature gradient. The measure of the magnitude of electrons flow in response to a temperature difference across that material is given by the Seebeck coefficient (S). The efficiency of a given material to produce a thermoelectric power is governed by its “figure of merit” zT = S2σT/κ.

For many years, the main three semiconductors known to have both low thermal conductivity and high power factor were bismuth telluride (Bi2Te3), lead telluride (PbTe), and silicon germanium (SiGe). These materials have very rare elements which make them very expensive compounds.

Today, the thermal conductivity of semiconductors can be lowered without affecting their high electrical properties using nanotechnology. This can be achieved by creating nanoscale features such as particles, wires or interfaces in bulk semiconductor materials. However, the manufacturing processes of nano-materials is still challenging. 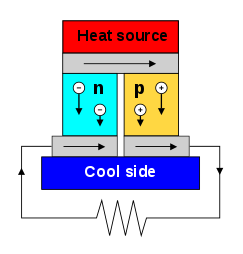 A thermoelectric circuit composed of materials of different Seebeck coefficient (p-doped and n-doped semiconductors), configured as a thermoelectric generator.

In application, thermoelectric modules in power generation work in very tough mechanical and thermal conditions. Because they operate in very high temperature gradient, the modules are subject to large thermally induced stresses and strains for long periods of time. They also are subject to mechanical fatigue caused by large number of thermal cycles.

Thus, the junctions and materials must be selected so that they survive these tough mechanical and thermal conditions. Also, the module must be designed such that the two thermoelectric materials are thermally in parallel, but electrically in series. The efficiency of a thermoelectric module is greatly affected by the geometry of its design.

Using thermoelectric modules, a thermoelectric system generates power by taking in heat from a source such as a hot exhaust flue. In order to do that, the system needs a large temperature gradient, which is not easy in real-world applications. The cold side must be cooled by air or water. Heat exchangers are used on both sides of the modules to supply this heating and cooling.

There are many challenges in designing a reliable TEG system that operates at high temperatures. Achieving high efficiency in the system requires extensive engineering design in order to balance between the heat flow through the modules and maximizing the temperature gradient across them. To do this, designing heat exchanger technologies in the system is one of the most important aspects of TEG engineering. In addition, the system requires to minimize the thermal losses due to the interfaces between materials at several places. Another challenging constraint is avoiding large pressure drops between the heating and cooling sources.

After the DC power from the TE modules passes through an inverter, the TEG produces AC power, which in turn, requires an integrated power electronics system to deliver it to the customer.

.When the compatibility factor from one segment to the next differs by more than a factor of about two, the device will not operate efficiently. The material parameters determining s (as well as zT) are temperature dependent, so the compatibility factor may change from the hot side to the cold side of the device, even in one segment. This behavior is referred to as self-compatibility and may become important in devices design for low temperature operation.

In general, thermoelectric materials can be categorized into conventional and new materials:

There are many TEG materials that are employed in commercial applications today. These materials can be divided into three groups based on the temperature range of operation:

Although these materials still remain the cornerstone for commercial and practical applications in thermoelectric power generation, significant advances have been made in synthesizing new materials and fabricating material structures with improved thermoelectric performance. Recent research have focused on improving the material’s figure-of-merit (zT), and hence the conversion efficiency, by reducing the lattice thermal conductivity.

Researchers are trying to develop new thermoelectric materials for power generation by improving the figure-of-merit zT. One example of these materials is the semiconductor compound ß-Zn4Sb3, which possesses an exceptionally low thermal conductivity and exhibits a maximum zT of 1.3 at a temperature of 670K. This material is also relatively inexpensive and stable up to this temperature in a vacuum, and can be a good alternative in the temperature range between materials based on Bi2Te3 and PbTe.

Beside improving the figure-of-merit, there is increasing focus to develop new materials by increasing the electrical power output, decreasing cost and developing environmentally friendly materials. For example, when the fuel cost is low or almost free, such as in waste heat recovery, then the cost per watt is only determined by the power per unit area and the operating period. As a result, it has initiated a search for materials with high power output rather than conversion efficiency. For example, the rare earth compounds YbAl3 has a low figure-of-merit, but it has a power output of at least double that of any other material, and can operate over the temperature range of a waste heat source

In order to increase the figure of merit (zT), a material’s thermal conductivity should be minimized while its electrical conductivity and Seebeck coefficient is maximized. In most cases, methods to increase or decrease one property result in the same effect on other properties due to their interdependence. novel processing technique exploits the scattering of different phonon frequencies to selectively reduce lattice thermal conductivity without the typical negative effects on electrical conductivity from the simultaneous increased scattering of electrons. In a bismuth antimony tellurium ternary system, liquid-phase sintering is used to produce low-energy semicoherent grain boundaries, which do not have a significant scattering effect on electrons. The breakthrough is then applying a pressure to the liquid in the sintering process, which creates a transient flow of the Te rich liquid and facilitates the formation of dislocations that greatly reduce the lattice conductivity.] The ability to selectively decrease the lattice conductivity results in reported zT values of 1.86 ± .15 which are a significant improvement over current commercial thermoelectric generators which have typical figures of merit closer to .3-.6. These improvements highlight the fact that in addition to development of novel materials for thermoelectric applications, using different processing techniques to design microstructure is a viable and worthwhile effort. In fact, it often makes sense to work to optimize both composition and microstructure.

The typical efficiency of TEGs is around 5–8%. Older devices used bimetallic junctions and were bulky. More recent devices use highly doped semiconductors made from bismuth telluride (Bi2Te3), lead telluride (PbTe),] calcium manganese oxide (Ca2Mn3O8) or combinations thereof,depending on temperature. These are solid-state devices and unlike dynamos have no moving parts, with the occasional exception of a fan or pump. For a discussion of the factors determining and limiting efficiency, and ongoing efforts to improve the efficiency, see the article Thermoelectric materials – Device efficiency.

Thermoelectric generators have a variety of applications. Frequently, thermoelectric generators are used for low power remote applications or where bulkier but more efficient heat engines such as Stirling engines would not be possible. Unlike heat engines, the solid state electrical components typically used to perform thermal to electric energy conversion have no moving parts. The thermal to electric energy conversion can be performed using components that require no maintenance, have inherently high reliability, and can be used to construct generators with long service-free lifetimes. This makes thermoelectric generators well suited for equipment with low to modest power needs in remote uninhabited or inaccessible locations such as mountaintops, the vacuum of space, or the deep ocean.

Besides low efficiency and relatively high cost, practical problems exist in using thermoelectric devices in certain types of applications resulting from a relatively high electrical output resistance, which increases self-heating, and a relatively low thermal conductivity, which makes them unsuitable for applications where heat removal is critical, as with heat removal from an electrical device such as microprocessors.

While TEG technology has been used in military and aerospace applications for decades, new TE materials and systems are being developed to generate power using low or high temperatures waste heat, and that could provide a significant opportunity in the near future. These systems can also be scalable to any size and have lower operation and maintenance cost.

In general, investing in TEG technology is increasing rapidly. The global market for thermoelectric generators is estimated to be US$320 million in 2015. A recent study estimated that TEG is expected to reach $720 million in 2021 with a growth rate of 14.5%. Today, North America capture 66% of the market share and it will continue to be the biggest market in the near future. However, Asia-Pacific and European countries are projected to grow at relatively higher rates. A study found that the Asia-Pacific market would grow at a Compound Annual Growth Rate (CAGR) of 18.3% in the period from 2015 to 2020 due to the high demand of thermoelectric generators by the automotive industries to increase overall fuel efficiency, as well as the growing industrialization in the region.

Low power TEG or “sub-watt” (i.e. generating up to 1 Watt peak) market is a growing part of the TEG market, capitalizing on latest technologies. Main applications are sensors, low power applications and more globally Internet of things applications. A specialized market research company indicated that 100 000 units have been shipped in 2014 and expects 9 million units per year by 2020